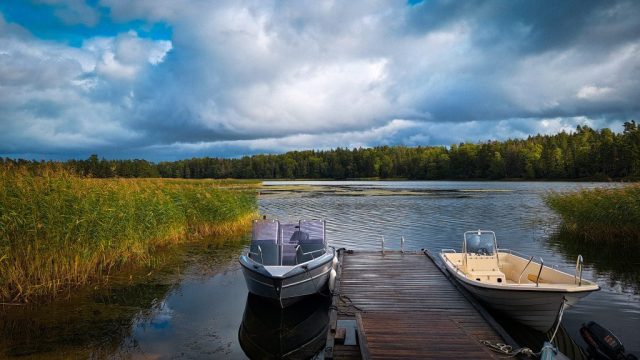 The Turku BioImaging (TBI) Image Data Team (IDAT) visited Åbo Akademi University’s Husö Biological Research Station in the Åland Islands in September 2022, The visit was part of IDAT’s collaboration with the station’s researchers in the area of image data analysis related to reed growth in the archipelago. The IDAT delegation was composed of Pasi Kankaanpää, Head of Biological Imaging at TBI and Junel Solis, Image Data Analyst. The team were received by Martin Snickars, Research Station Director, and Tony Cederberg, Station Manager.

Marine biologists at Husö station are interested in the growth of Phragmites australis reed belts in the Åland archipelago. This progression is driven by the change in the nutrient content of the environment and has caused the reeds to become a common sight in the Finnish coastal areas, taking over space from other species.

For the last few months, IDAT has been working on processing drone images of Phragmites australis reed belts acquired by Husö station. Large numbers of images are captured by a specialized drone following exact flight patterns. The acquired images first need to be reassembled, much like a large jigsaw puzzle, and georeferenced. Then, the reed belts need to be identified from the images so that their sizes can be quantified. IDAT created an artificial intelligence (AI) model that recognizes the areas of the images covered by reeds with high accuracy. This process is particularly challenging due to the large image sizes, the need to take into account geographic coordinate reference systems, and variations in the image features related to the environment such time of day, season, and weather conditions. During IDAT’s visit to Husö, the first version of the AI-based software created by IDAT was installed by Junel Solis in one of the station’s research computers.

While the focus of IDAT is primarily in processing image data from microscopes and other biological and medical imaging devices, this Åland Reed Belt project is a good example of the potential for cross-disciplinary activity in image data processing. In this case, IDAT took AI technology commonly used for fluorescence microscopy images and applied it to reed belt images of an entirely different geometric scale.

“We are very excited to be able to apply our methods in this way, and we see great potential here for further studies of for instance the effects of climate change”, explains Pasi Kankaanpää.

TBI plans to continue the collaboration with Husö Biological Research Station. IDAT and the Husö researchers are interested in looking for more ways to extract information from existing data, such as to analyze other plant species, including underwater ones. Developing the accuracy of the AI models is also important. One potential approach is to incorporate existing reed and coastline topographic information sourced from the National Land Survey of Finland (Maanmittauslaitos) into the image processing pipeline.